An Elevated Rustic Italian Micro Wedding Along the Truckee River 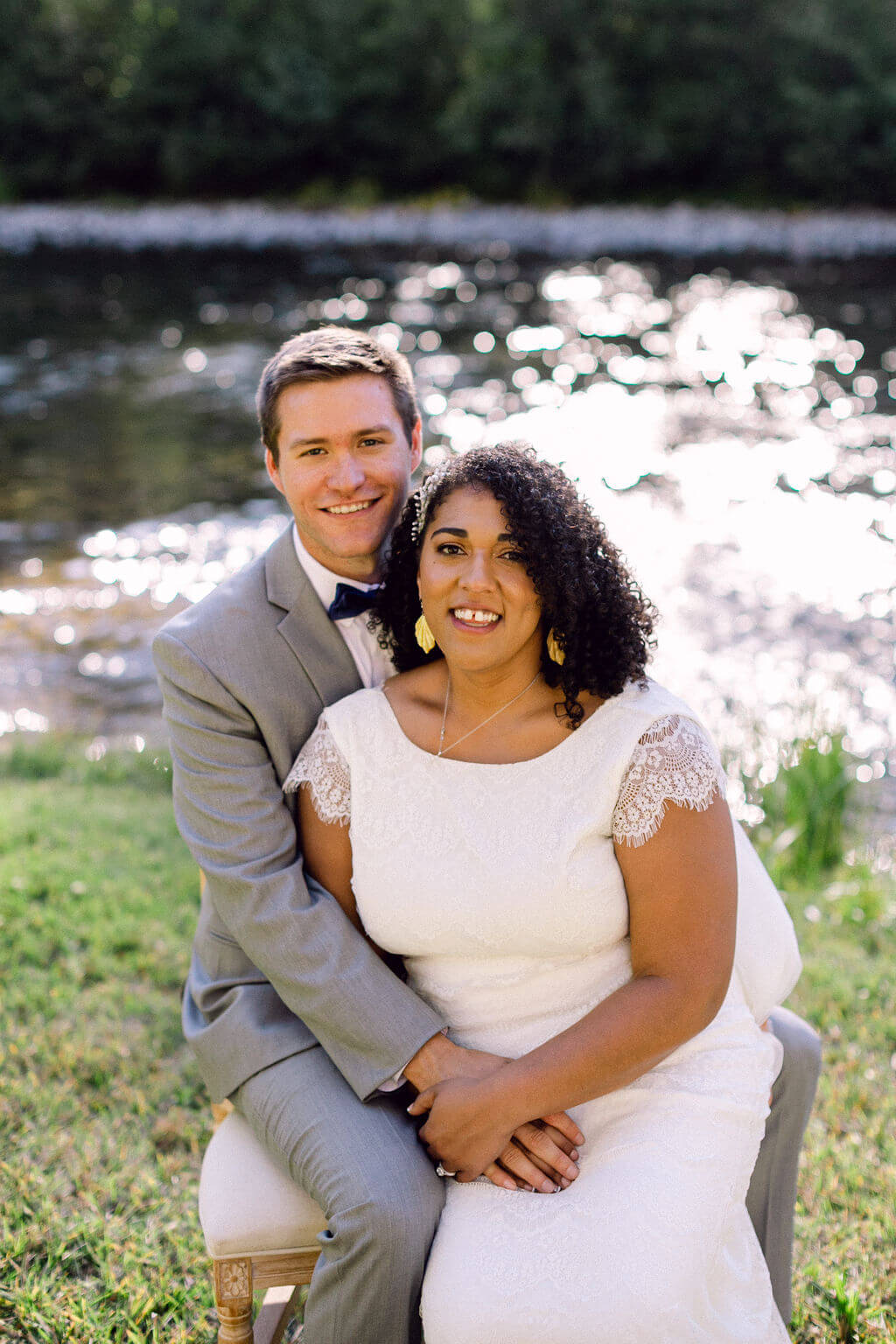 After a rough few months for the wedding industry and couples alike, we decided to host a wedding giveaway with One Fine Day Events towards the end of 2020. We teamed up with many talented vendors from our Vendor Guide to help one lucky couple win their dream wedding, everything included. Kacey and Stephen were the lucky winners, and weren't they just the dream couple. No detail was spared or overlooked when the all-star vendor team came together to create this elevated rustic Italian micro wedding along the Truckee River. And we can't wait to show you how it all unfolded!

First, let's go back to where it all began. Kacey, a psychiatric caseworker, and Stephen, a wildland firefighter, first crossed paths in February 2011 at a mutual friend's house in college. Kacey noticed him while he was leaving and asked her friend about him. He did what any good friend would do; he gave Stephen her number. And, of course, Stephen reached out. The two started spending a lot of time together, which eventually led to dating. To their surprise, they learned that their grandparents lived on the same road in Troy, Alabama. Seeing that it's a tiny town, it came as quite a surprise that they had never run into each other before. "I think I knew from the beginning Stephen was going to be my husband. I had never felt so at home with anyone else. We instantly clicked and began spending all of our free time with one another," Kacey gushed. Early on, when they were still dating, the couple would even leave handwritten notes on each other's vehicles while at work or in class. Like, how sweet is that! 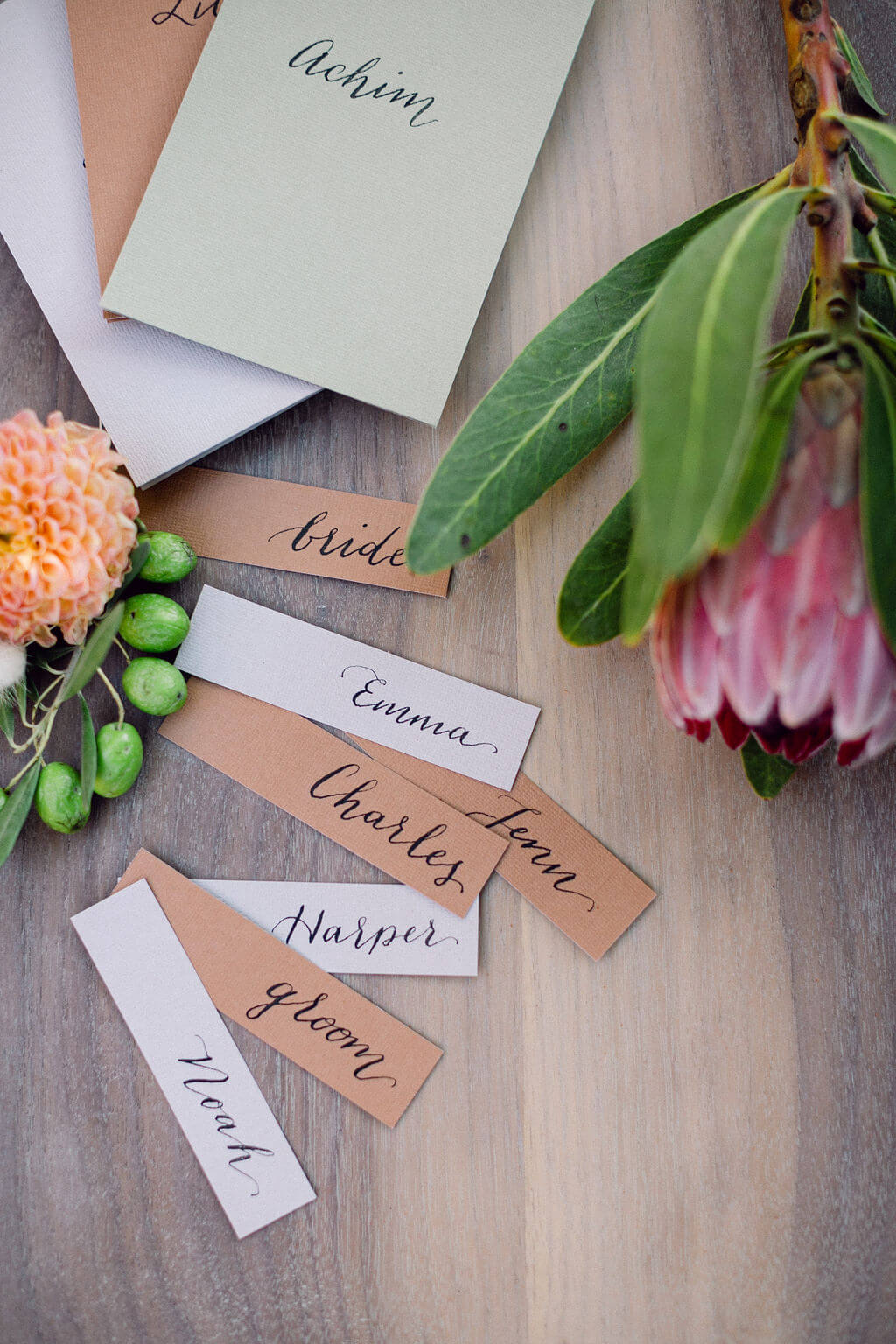 After Kacey graduated, they moved to another town in Alabama for Stephen to complete his forestry degree. The couple started long-distancing when Stephen began working out west for six months out of the year, battling wildfires and returning home for the remaining six months. This continued for two years until Kacey decided to move out west to be closer to him. Kacey packed her bags again, and it was worth it because an engagement right out of a romance novel followed. And the backdrop for that novel? Reno, Nevada, at the Truckee River! "That New Year's Eve, we had tickets to a music festival in South Lake Tahoe where Stephen planned to propose. He was called to a fire in Southern California right before Christmas, and we missed spending the holidays together. When he returned home, we took a family walk with our dog Roxi by the Truckee River. We shared a special moment here one night when we saw a duck pair and discussed how they mate for life and how we plan to be together forever. When we made it to that spot on our walk, Stephen dropped to one knee and proposed. It was so special to be back in that spot where we shared such an intimate moment. Of course, I said yes, and then we took pictures in front of the big 'Believe' sign by the river."

Like most couples, Kacey and Stephen's wedding plans were also affected by COVID-19. Most of their family is located on the East Coast, so they originally wanted a wedding in Lake Tahoe and share their new home with their family and friends. Unfortunately, that was shut down when Kacey's grandparents were unable to fly. So another plan emerged: an intimate ceremony in Mexico. Unfortunately, COVID hit, and they were unable to travel. Soon after, Kacey lost her grandparents to COVID, and Stephen lost his father to a stroke. After the unexpected loss of loved ones, the couple decided they did not want to wait any longer to be married. They began to think about options once the restrictions eased, and this is where the couple's luck turned for the better.

They entered One Fine Day and Tahoe Unveiled's wedding giveaway and won! And as luck would have it, the wedding venue was along the same river that Stephen got on one knee - talk about coming full circle! Even though ten guests initially seemed difficult, it ended up being the perfect number because both Kacey and Stephen come from large families. What wasn't difficult, though, was the planning. The couple planned their wedding in a week, and their guest list comprised both their surviving parents and their dearest friends who could attend on such short notice.

If you were wondering about the dress, of course, we have the deets! As part of the giveaway, Kacey was linked to the bridal shop Moonlight Lace, who helped her find her beautiful scalloped eyelash lace wedding dress by Daughters of Simone. In addition, Kacey added a personal touch to her wedding ensemble by wearing a pair of her late mother's earrings. Kacey's aunt mailed her the earrings, not knowing the color palettes for the wedding, and they ended up matching perfectly.

Kacey also attached a locket on her bouquet with her mom's picture and a quote saying, "I know you'd be here today if heaven wasn't so far away." Talking about bouquets, Kacey's was the perfect loose and effortless gathering of greenery mixed with a few pops of peach and white florals. She chose a David Yurman Cable Classic bracelet with blue topaz, a gift from her dad, as her something blue. On the other hand, Stephen looked sharp in his dark grey Joseph Abboud satin tuxedo paired with a deep blue bow tie. The boutonniere was a smaller version of Kacey's bouquet, and boy did it pair nicely together. 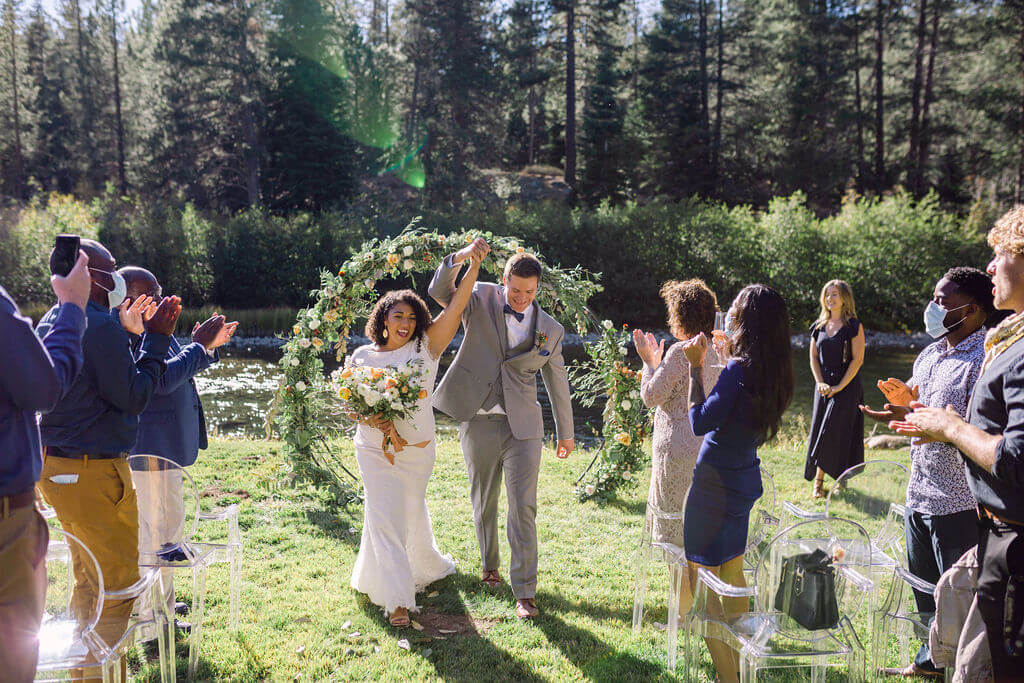 Kacey's dad walked her down the aisle to an acoustic version of "My Girl" by The Temptations, a song that has always been special to them. The guests watched as the couple exchange vows from their beautiful Ghost chairs adorned in greenery and earthy florals. The earth-tone hues can be seen throughout the wedding decor, complemented by pops of rust and clay.

"The ceremony was an absolute dream. It was intimate and so special to us that we could be married at the same river we were engaged at only in a different city," Kacey said. "We would encourage couples who have to pivot from their original plan to focus on each other and the main reason for the event ... marrying your best friend!" Kacey was also glad that they were able to do it their way; they got ready together and opt not to do all the traditional rituals. "We are so grateful for the beautiful intimate wedding Stephanie from One Fine Day Events and all the vendors provided to us. We were very lucky to have their help as they definitely eased the wedding planning stress." 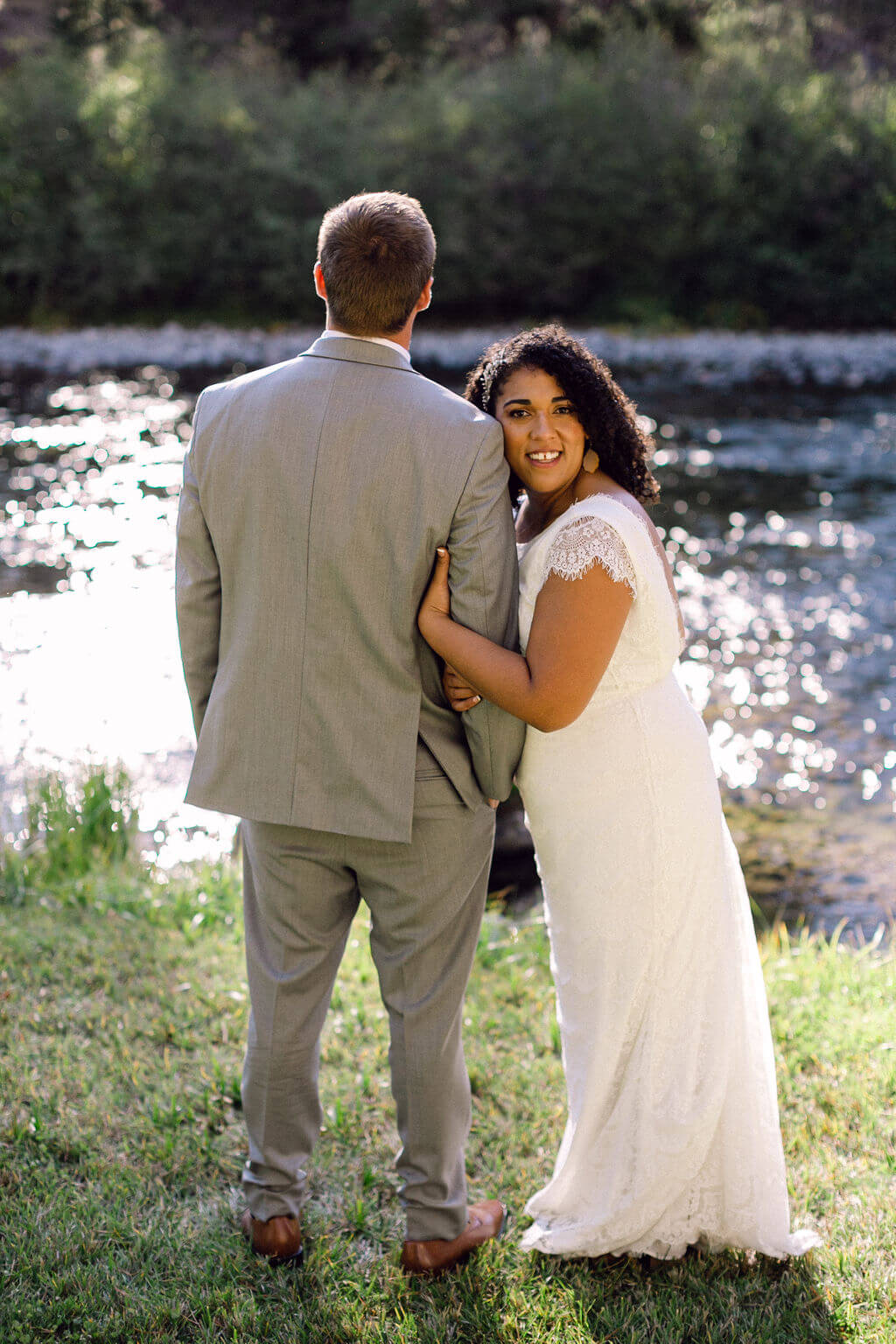 The reception took place under a beautiful cabana with fabric blowing in the wind and a collection of unique woven chandeliers overhead. Different vessels lined the tables with olive branches and simple touches to complete the effortless design. In the end, everything tied perfectly together to ensure Kacey and Stephen's elevated rustic Italian affair will be remembered for years to come. 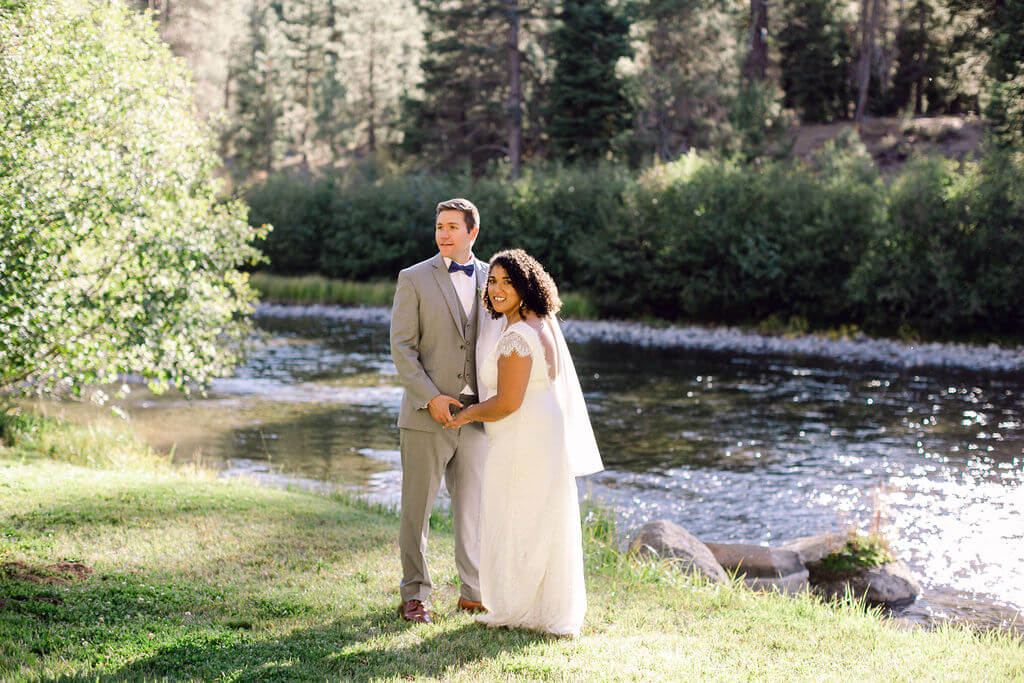 "One of our favorite parts of our micro wedding was the 'love notes,' we wrote for our guests. It was so lovely to hear their reactions. We were able to celebrate like a big wedding. Still, we had the intimacy of the micro-style, and we were able to share it with our friends and family and have it in the first location we wanted - Tahoe," said Kacey.

If they could offer one pearl of wisdom to couples currently going through this situation, what would it be? "Stay focused on the why of the day, have fun, and enjoy it with your partner. You only have so much time to celebrate your wedding, so enjoy every bit of it."

The couple is still planning to have a reception celebration with their friends and family back on the East coast on their anniversary in 2022. But for now, they're soaking in every moment of that lovely newlywed bliss. 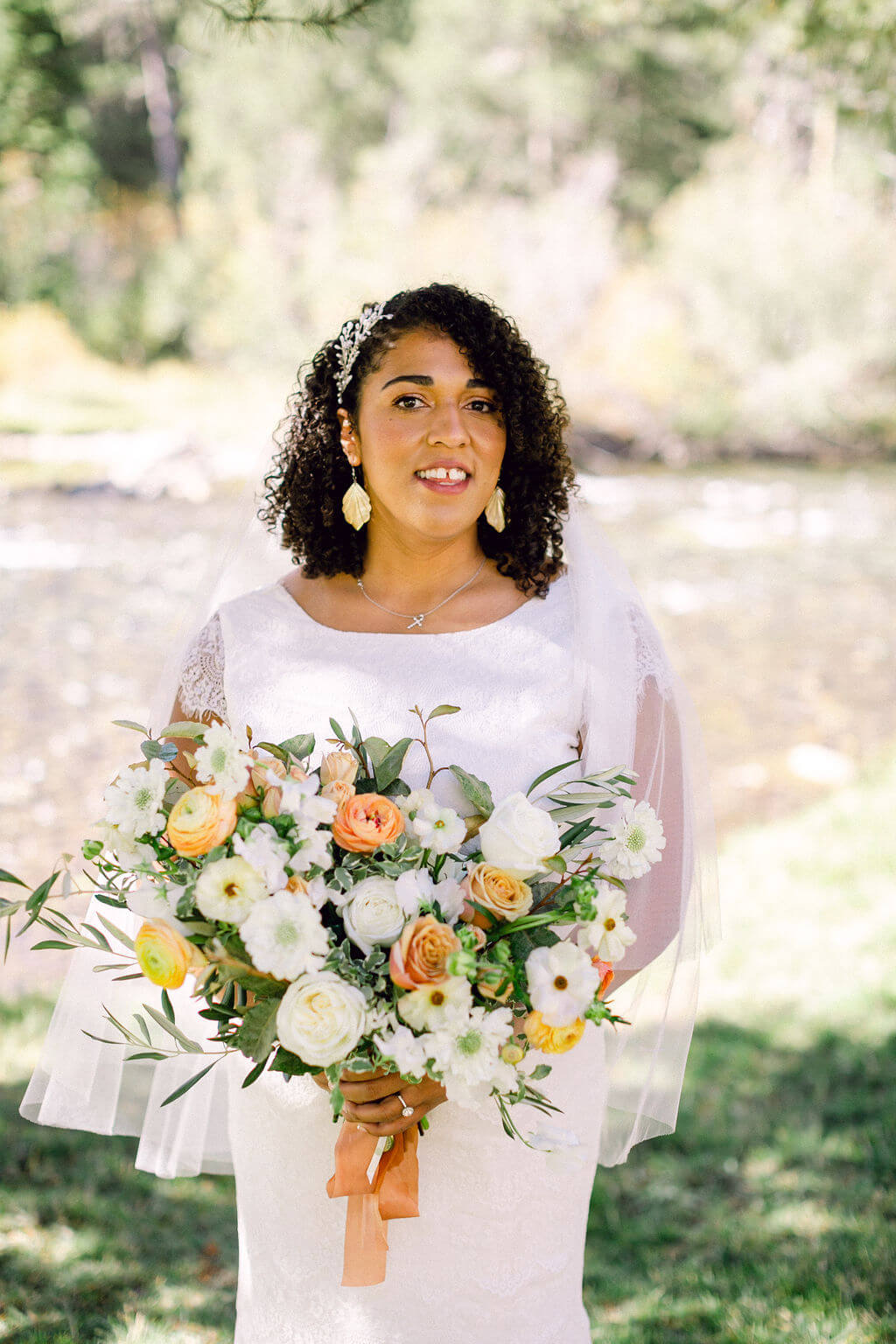 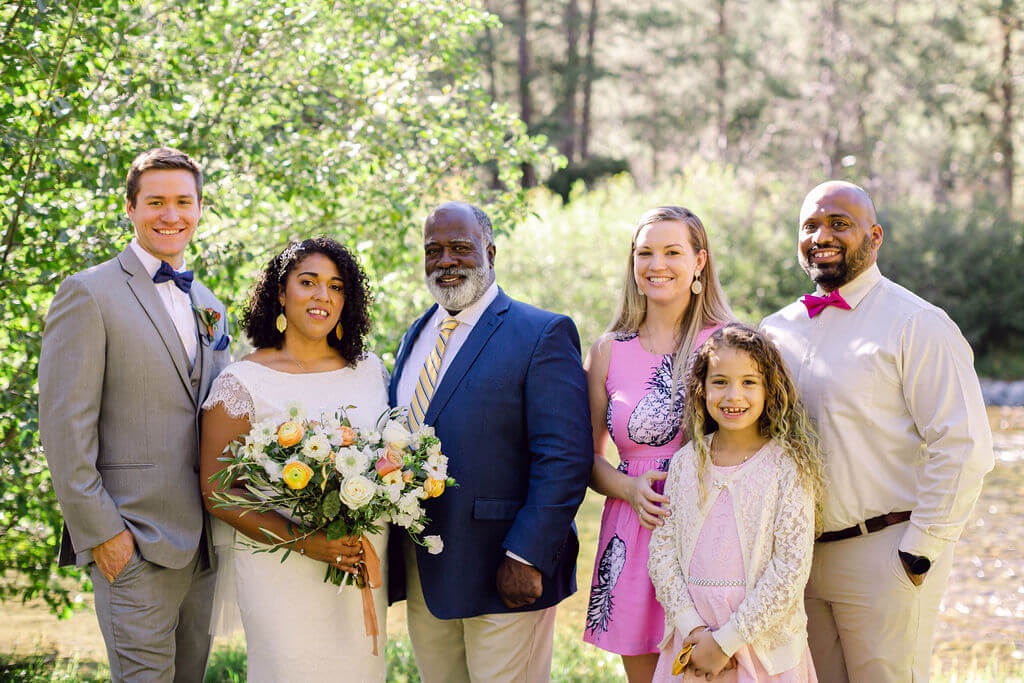 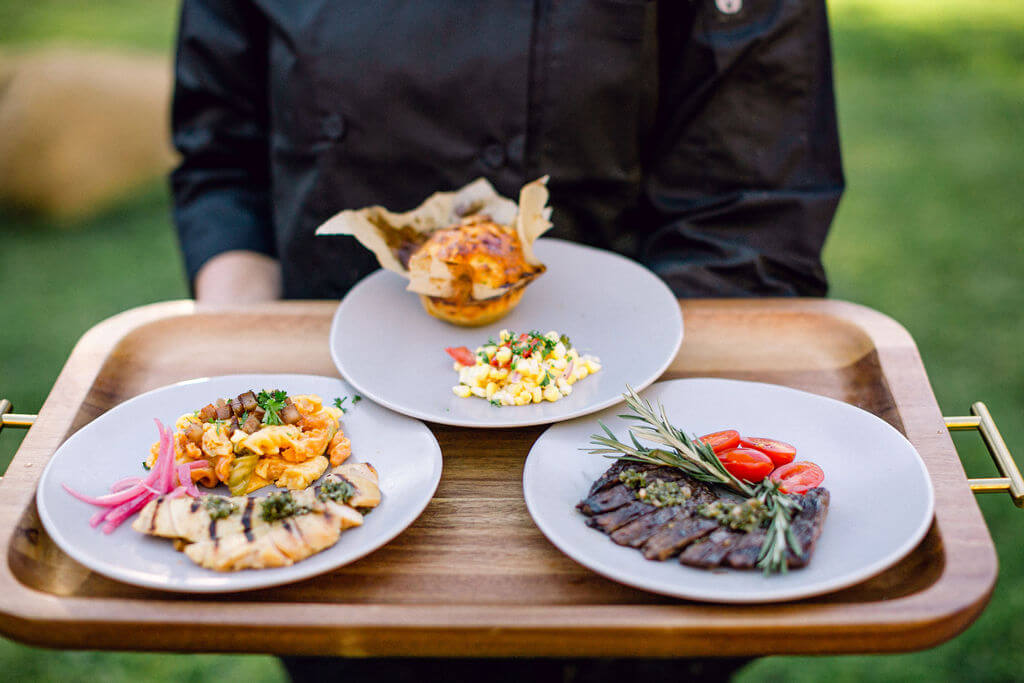 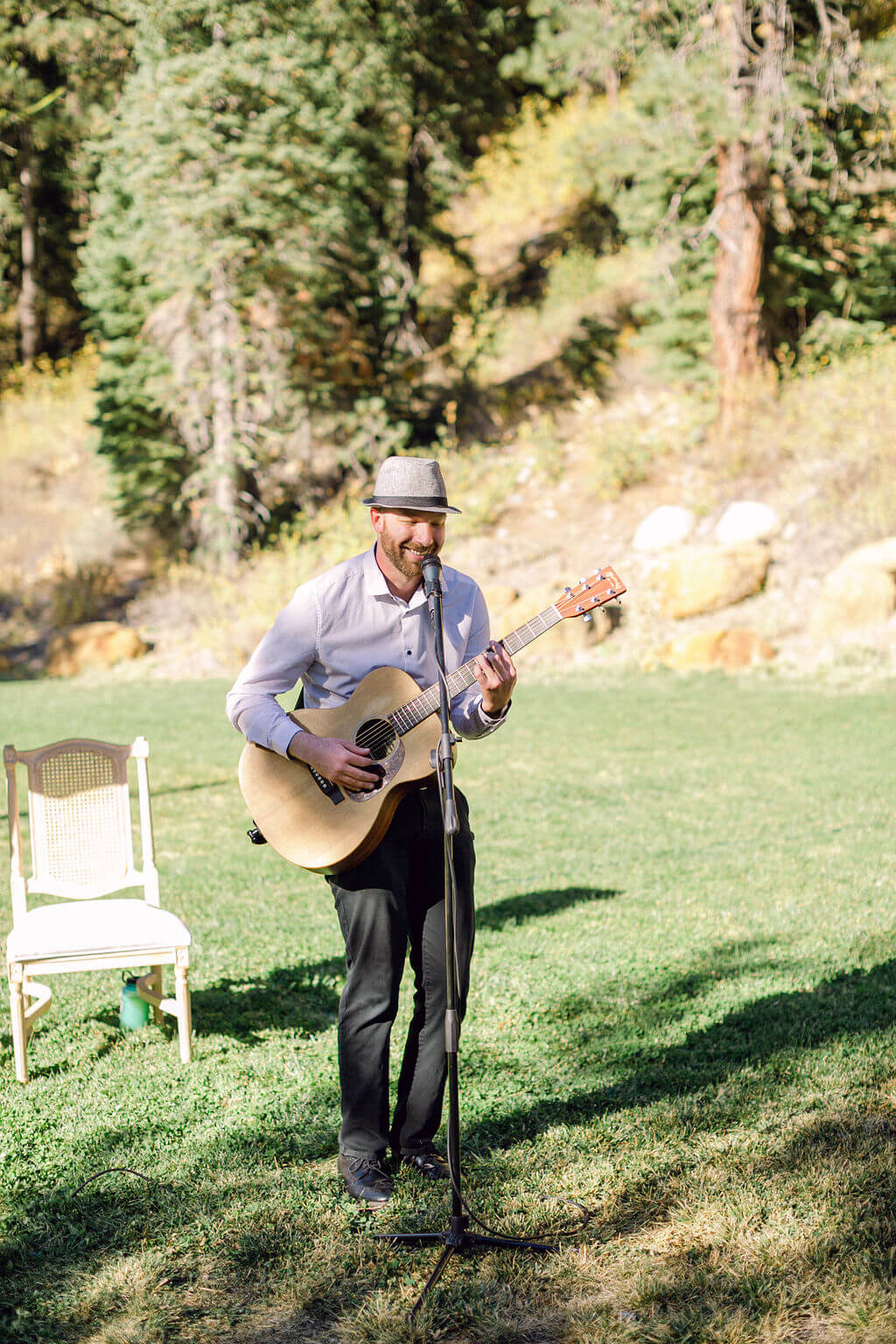 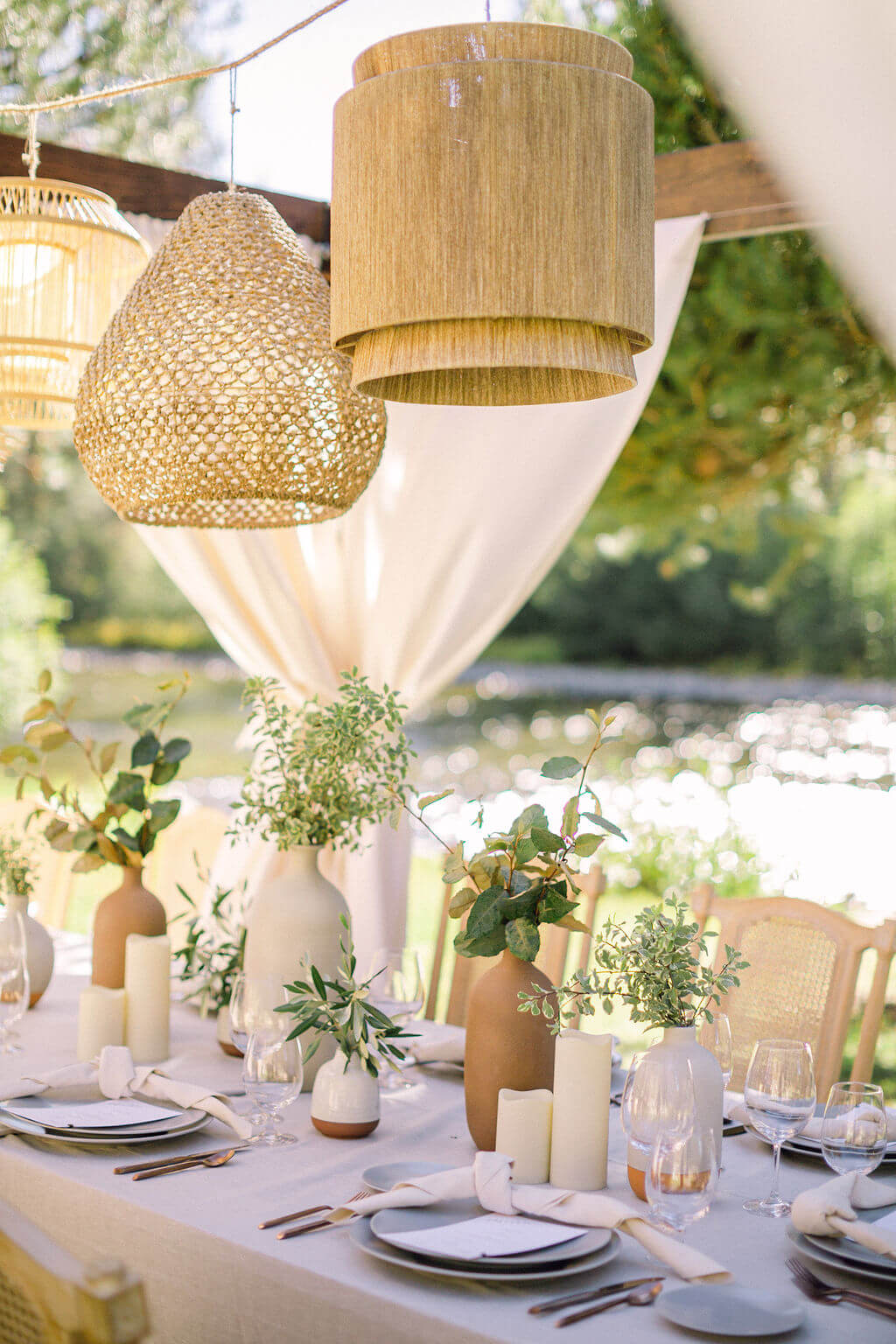 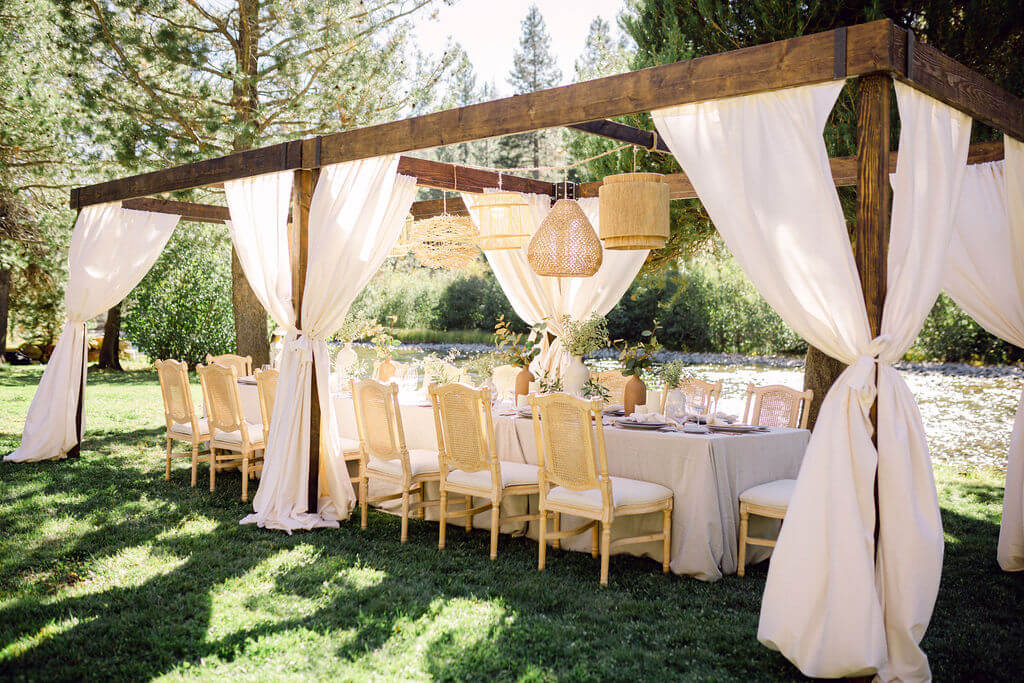 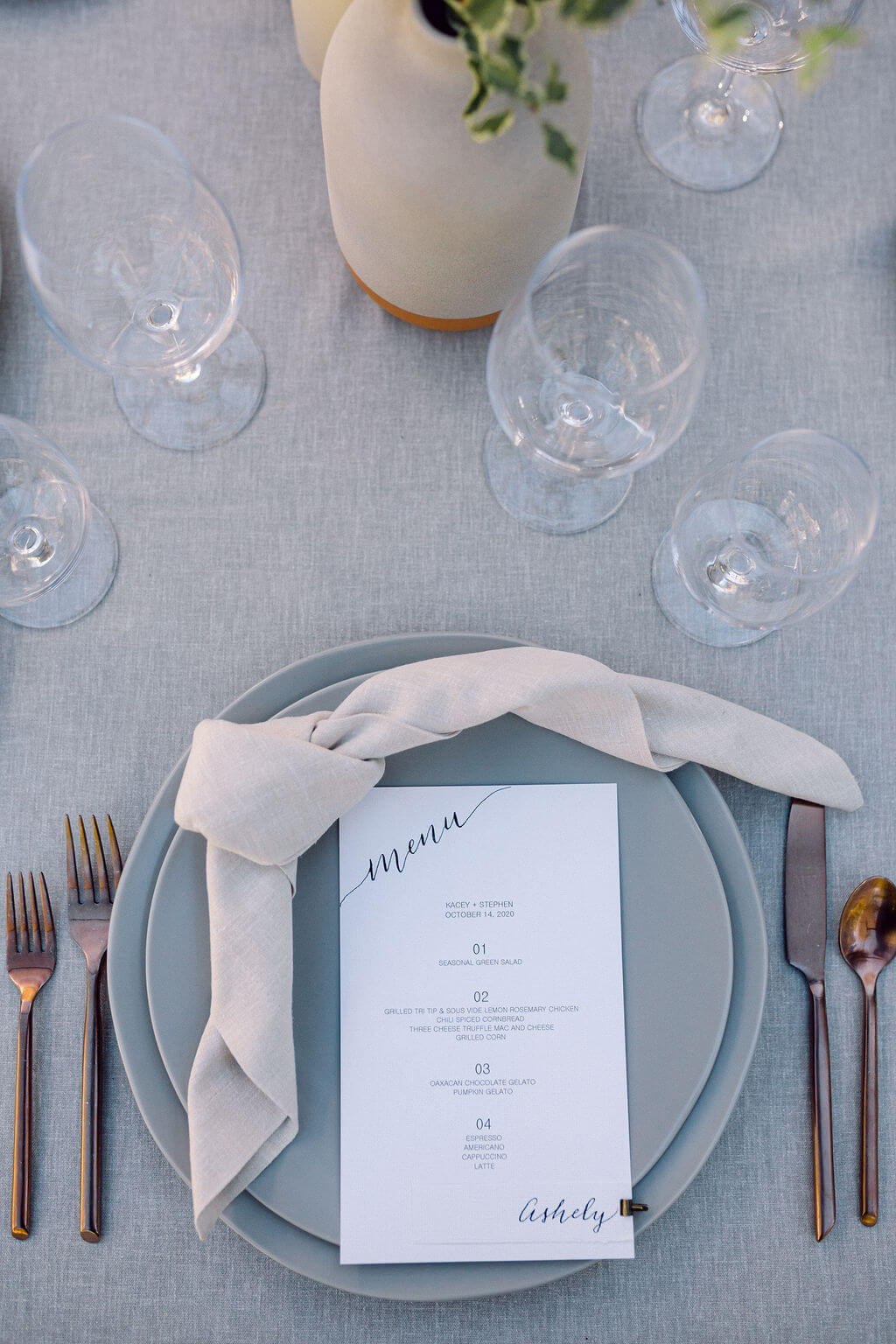 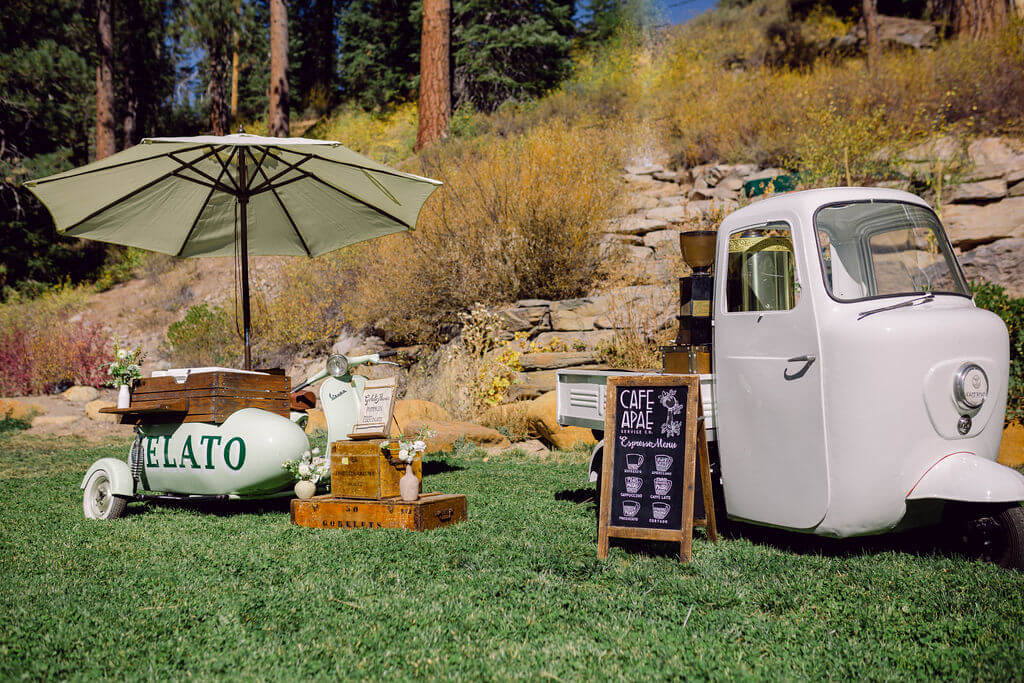 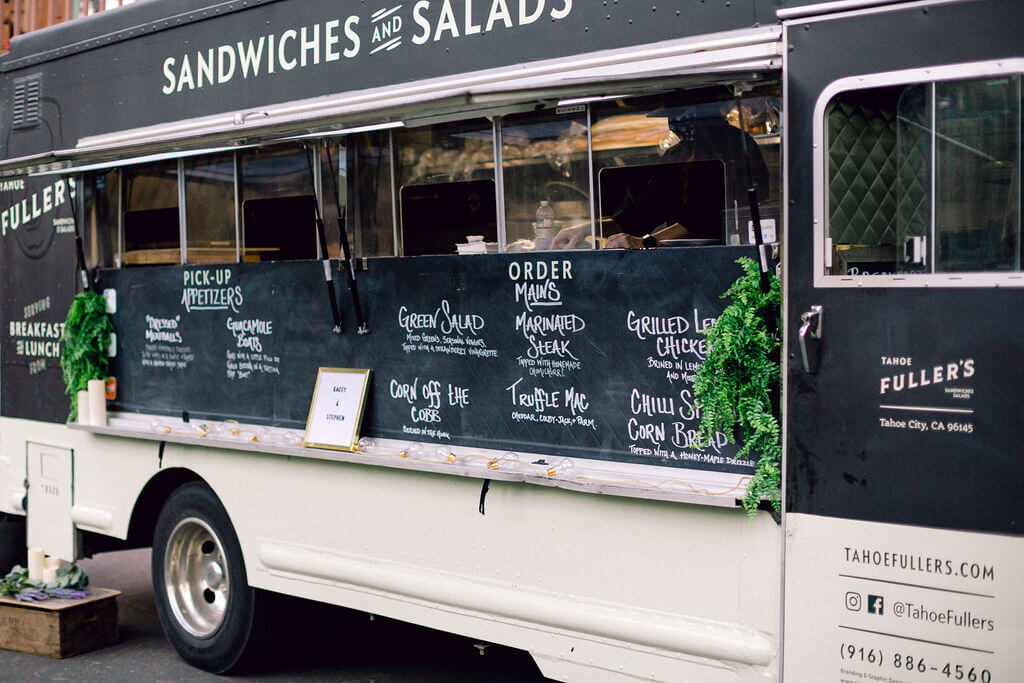 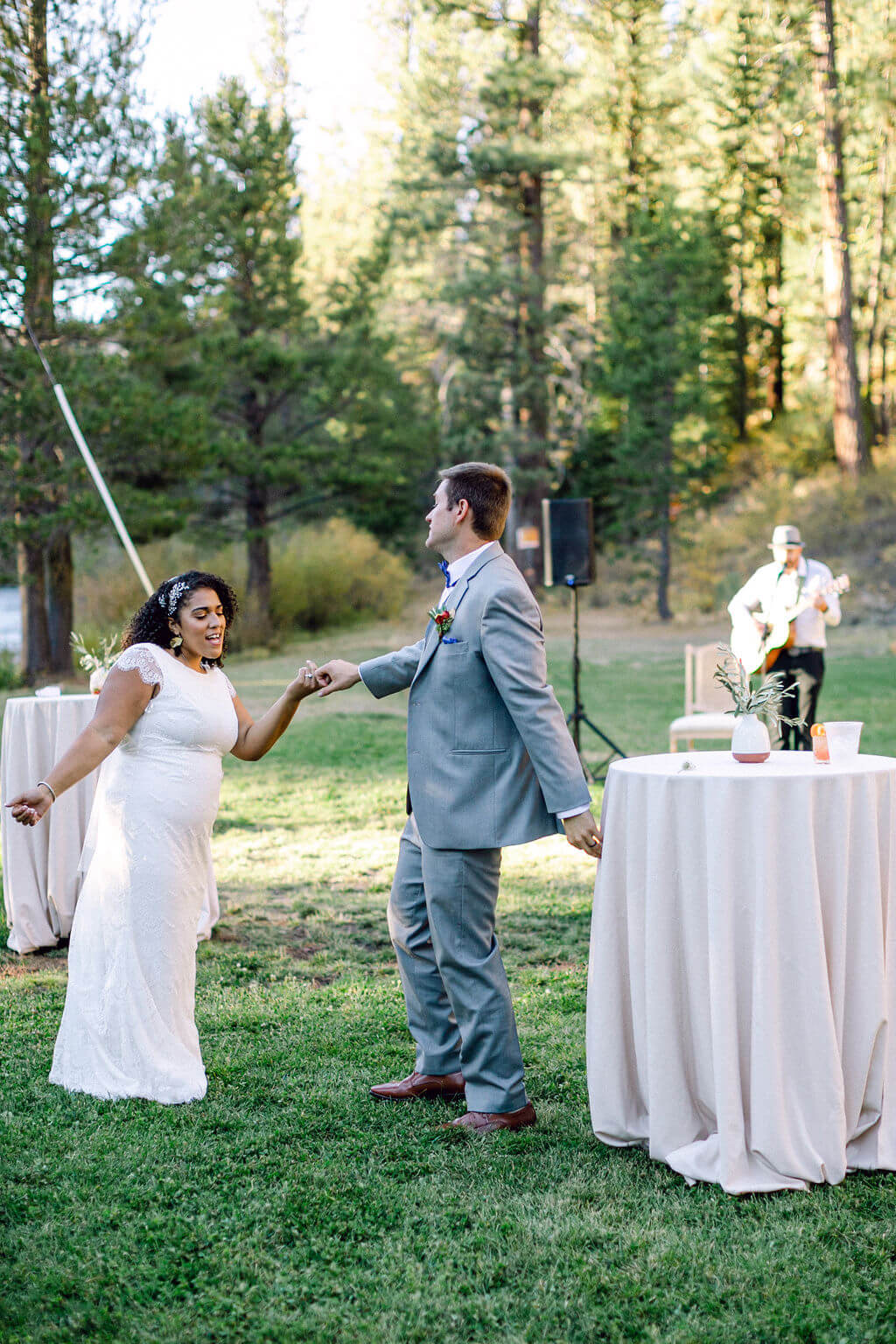 PrevThe Most Romantic Micro Wedding At The R...
NextA Winter Wonderland Elopement Like No Ot...

A Sweet and Sentimental Elopement on the West Shore