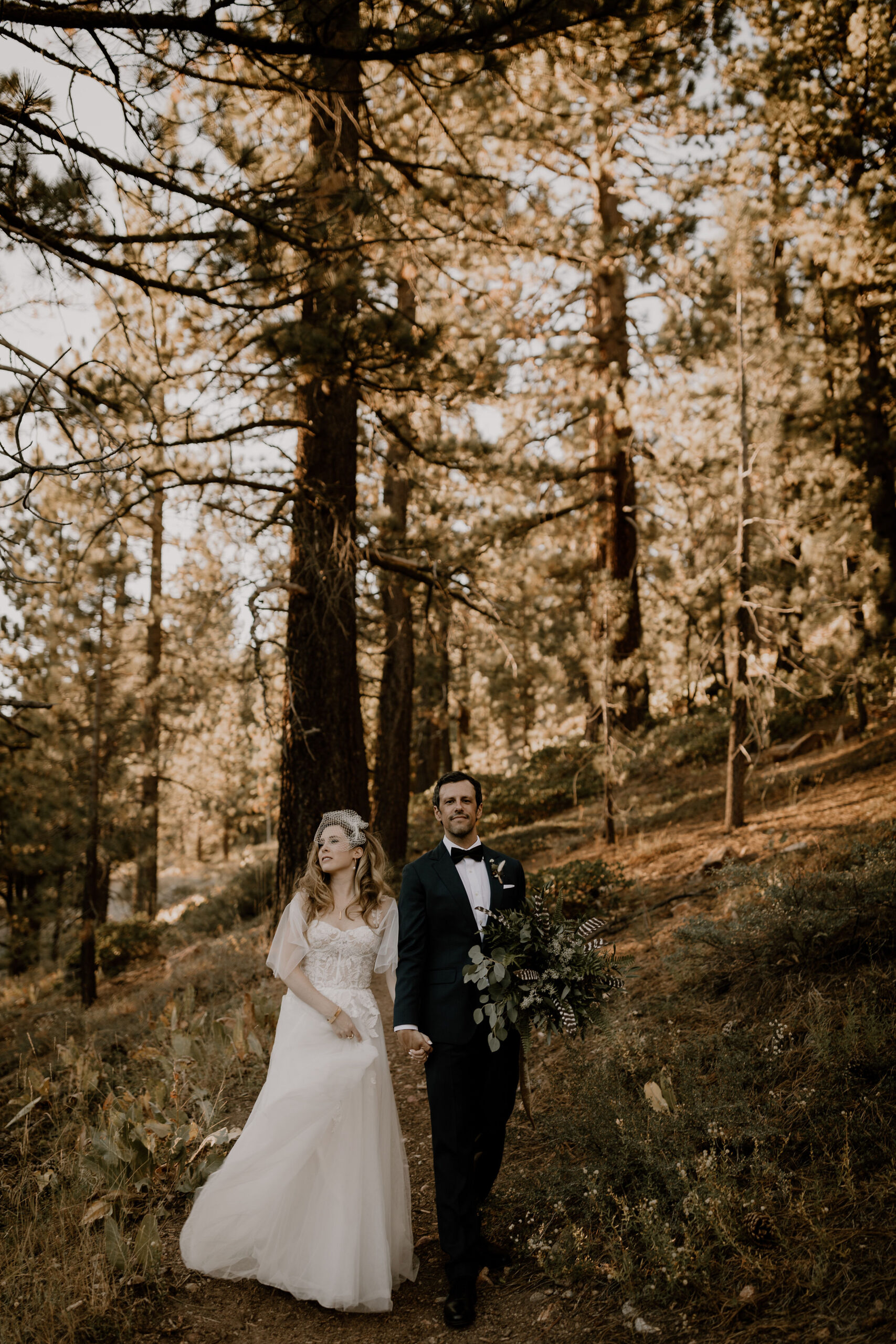 The scenic Sierra Nevada mountain range set the scene for Amanda and JJ’s gorgeous summer wedding. The couple tied the knot in an outdoor ceremony surrounded by aspen and pine trees. Here’s a peek into their Palisades Tahoe wedding captured by Darrian Dewald Photography!

The couple first connected through Bumble. But both deleted the app seeking real-world introductions for their next partner while focusing on enriching their individual lives. Two months later, JJ eyed Amanda across a bar in Denver, where they both lived. Of course, he sent her a text to make sure it was her, and they met at a soda fountain. They had their first date a week later and have been attached at the hip ever since.⁠

Despite being California natives, the duo had never been to Lake Tahoe until Amanda’s birthday trip in 2020. JJ proposed overlooking the lake at Skylandia Park between the pines. It was one day before Amanda’s birthday. He brought champagne and had The Shins playing on a Bluetooth speaker. Then he dropped to one knee beside her as she sat unexpectedly at a picnic bench. And it’s needless to say, she was pretty surprised. They return to this spot every time they are in Lake Tahoe.

Because Tahoe played such an important part in their journey, it seemed an obvious choice for a wedding destination. They always envisioned a large destination wedding among the trees where they could spend quality time with their loved ones throughout the weekend. And Palisades Tahoe ticked all the boxes!

The couple comes from different religious backgrounds. And hosting a Jewish wedding where more than half of the guests weren’t Jewish was challenging. While the wedding was prominently Jewish, the couple incorporated a Bible reading by JJ’s brother into the ceremony to ensure everyone felt included. In addition, the ceremony was hosted in English with Hebrew and English prayers. Also, they distributed programs detailing some traditions so that no one would feel lost throughout the ceremony. Finally, the couple introduced one of their favorite wedding traditions – the hora – to their non-Jewish friends and family!

One of the ceremony’s highlights was when Amanda’s dad kissed her cheek through the blusher piece of her veil. She had to whisper to him, “remove the veil and then kiss my cheek!” On the other hand, JJ accidentally picked up the officiant’s British accent for the last of his “I do” lines. Amanda chimed in and mimicked him when it was her turn because solidarity is important. The crowd lost it!

This wedding had no shortage of sentimental elements. Amanda lost her mom in high school and found unique ways to remember her throughout her special day. For example, she had a gold medallion made with a sign-off from a card written by her mother. Then, Amanda threaded a ribbon through the medallion’s loop and wrapped the ribbon around her bouquet. She also wore some of her mother’s jewelry on the wedding day and incorporated buttons from her mother’s wedding dress onto her Angel Rivera gown.

Seeing that the couple are both from Southern California beach towns, they each collected a jar of sand from the beach where they grew up. They combined them into one jar as a symbol of merging where they have come from to define where they are going. Donuts added another sentimental element to their special day. JJ brought donuts when he asked Amanda’s father for her hand in marriage. They affectionately coined this gift “The Donut Dowry.” So, the couple decided to stick with this theme and served donuts for dessert. Amanda and her dad built a donut wall by hand, bringing leftover donuts to the after-party in the village to share with others.

Amanda custom-designed the invitation suite herself, as well as the name cards and a logo printed on the welcome bags. The bag contained their favorite snacks, Advil, Emergen-C, and boxed water as an eco-friendly alternative to plastic bottles. In addition, the couple included a welcome note with details and a map of the weekend’s events. Amanda also made boutonnieres consisting of dried eucalyptus, bunny tail flowers, and feathers wrapped in twine. This tied nicely with her large, dramatic bouquet featuring pheasant feathers. And the best part? After the ceremony, the bouquet was used as the centerpiece for their sweetheart table!

When it came to the highlight of the reception, The Freshmakers’ performance tops the list. The band had at least three costume changes throughout the night, including one of the singers dressed as a king during “Bohemian Rhapsody.” JJ also surprised Amanda (and the crowd) at the night’s end by performing “First Date” by Blink-182. The band had changed into cut-off tees, sweatbands, and leggings and lent a pair of leggings to the groom so he wouldn’t rip his pants while shredding on stage. “It felt like a concert – and the band seemed to be every guest’s favorite part of the reception!” Amanda said.

So, does the couple have any advice for other couples planning a wedding? “Always view a venue in person before booking. We originally booked with a different venue. And we had to fight to get our deposit back after we visited and realized it wasn’t for us.” They also wished they had known that the sun would set a little earlier in the mountains. “Because of this, a bit of a wrench was thrown in our timeline during the reception. We had to step away much sooner than expected for our sunset photos. But all worked out well, as it usually does!”

Keep scrolling if you want to see more of this gorgeous Palisades Tahoe wedding! 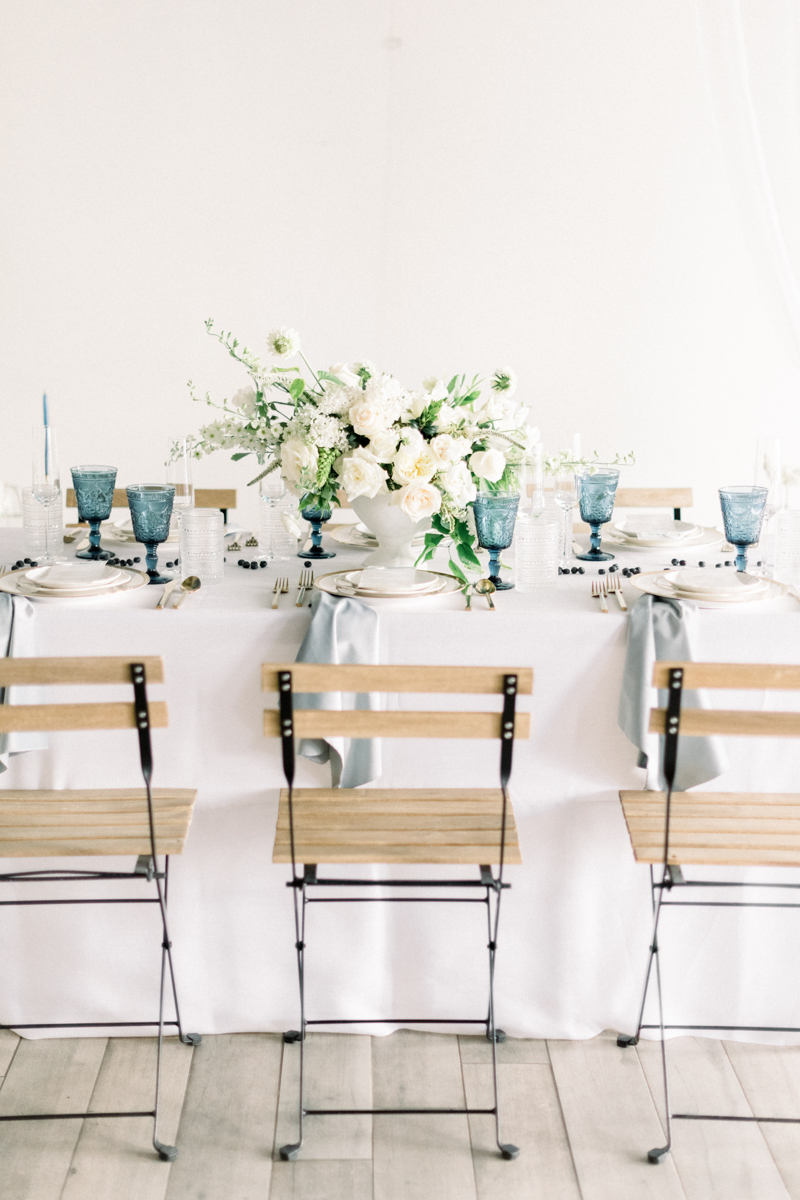