A Surprise Proposal on Eagle Rock 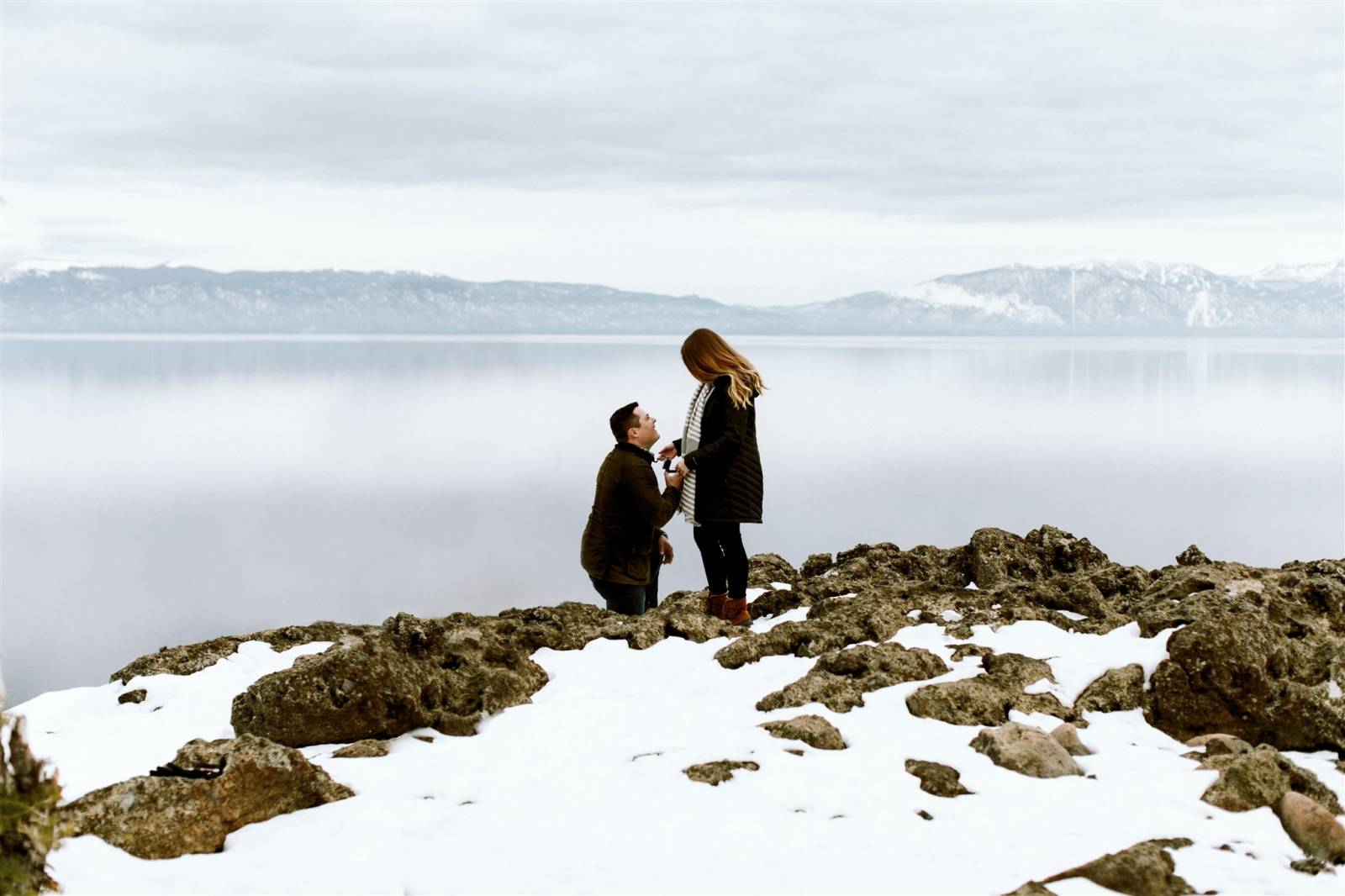 While Tahoe Unveiled may focus mostly on weddings, we can't lie: Lake Tahoe is a fabulous place to get engaged too. With photography by Tahoe adventure elopement specialist Ruthanne Z. and super-stealth planning by Allison Keasal of Forget Me Knot Events, this surprise engagement at the top of Eagle Rock is one we just had to share!

Josh and Jennifer met six and a half years ago in Auburn, Alabama. The setting was a job interview, standing on a pile of wood of a soon-to-be restaurant where Jennifer is now the event director. They worked together for several years, until Josh left the restaurant for a professional golfing career. A few golf tours and relationships (for both) later, fate brought them back together... and the rest is history! In late 2019, Josh called Jennifer's sister Allison - a highly respected wedding planner - to enlist her help in planning the perfect Lake Tahoe proposal.

After many secret conversations, Josh was certain that he wanted to propose to Jennifer on top of a mountain overlooking Lake Tahoe, where they had taken their first trip out of the South together. Allison set out, literally, on foot to hike around Tahoe, snapping photos and videos of locations and sending them to Josh to see what he thought. On one winter Sunday, Allison snowshoed to the top of Eagle Rock, at the suggestion of Ruthanne Z., and knew immediately that this was the perfect spot.

With the location secured, Allison and Josh began planning the surprise element of the proposal. (Side note: Allison lives for surprise proposals so she wanted her sister to have absolutely no inkling of what was coming.) There was a Plan A which Jennifer managed to sniff out so Josh and Allison moved to Plan B: enlisting photographer and lifelong Lake Tahoe local Ruthanne Z. to capture the big day.

The day after Jennifer and Josh's arrival in Tahoe, the sisters and their significant other's loaded up the car to take a hike to the top of Eagle Rock - one of the most stunning viewpoints over Lake Tahoe. Allison texted Ruthanne who was already hidden and waiting at the top, ready to sneak in behind the group once Josh was in the position to propose. Near the top, Allison suggested they take off their snowshoes to snap a quick photo with the lake in the background. As they posed, Josh pulled away from Jennifer's side and when she turned to look, he was on one knee asking her to marry him!

The ring, the rocky overlook, the lake, and especially the surprise made for an absolutely stunning and totally unforgettable proposal. Congratulations Jennifer and Josh and kudos to the dream planner and photographer team Forget Me Knot Events and Ruthanne Z.! 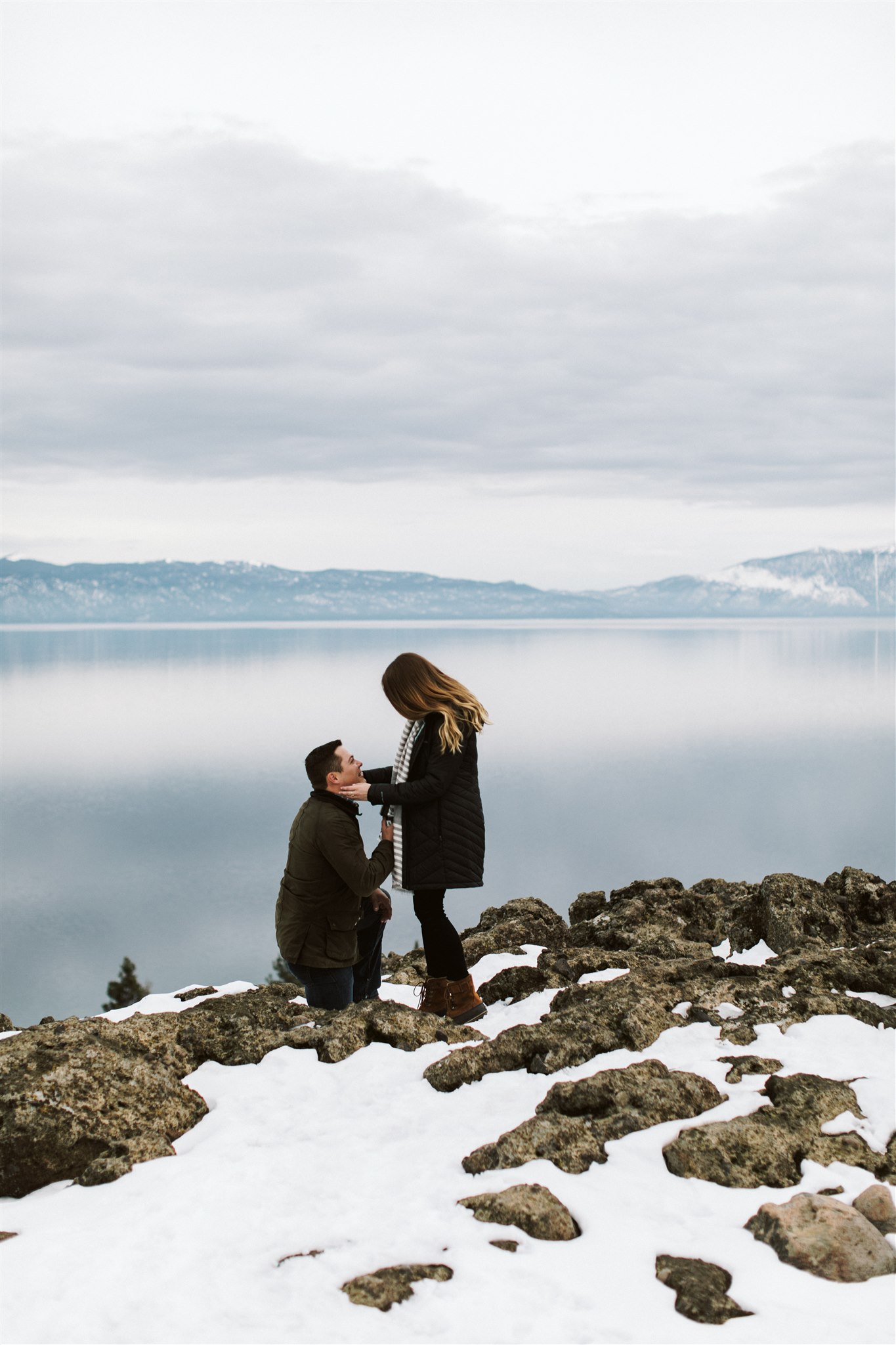 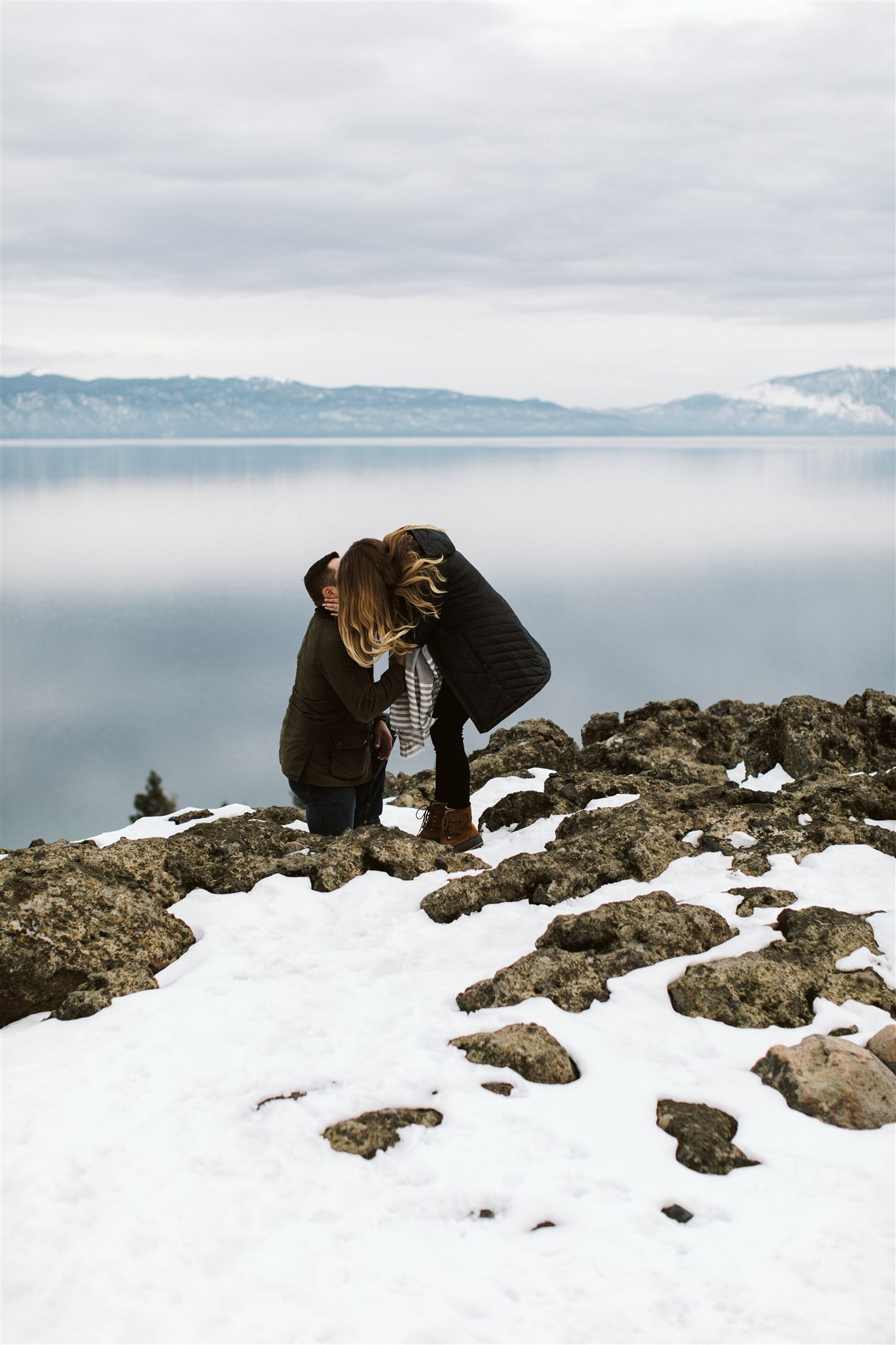 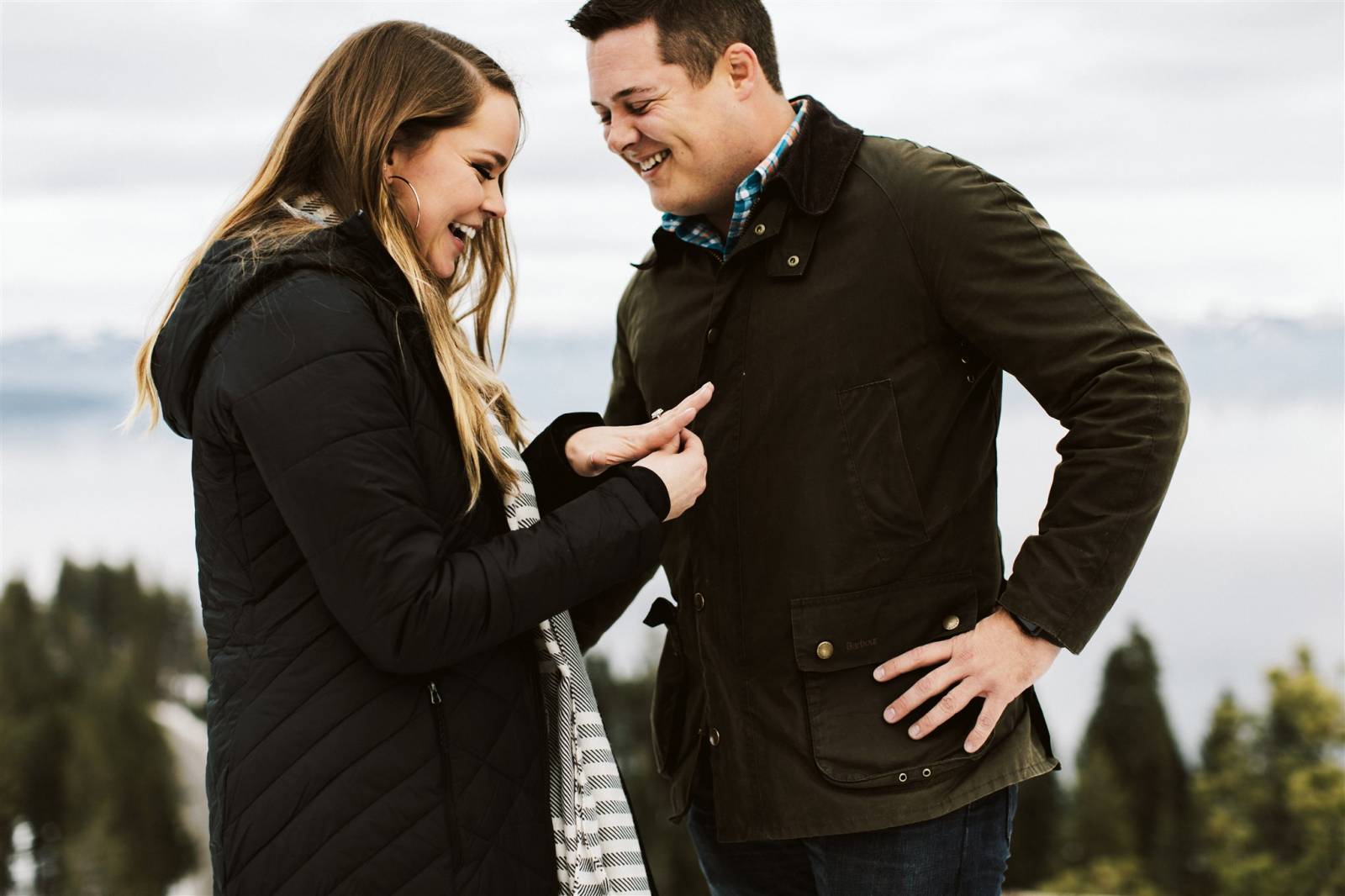 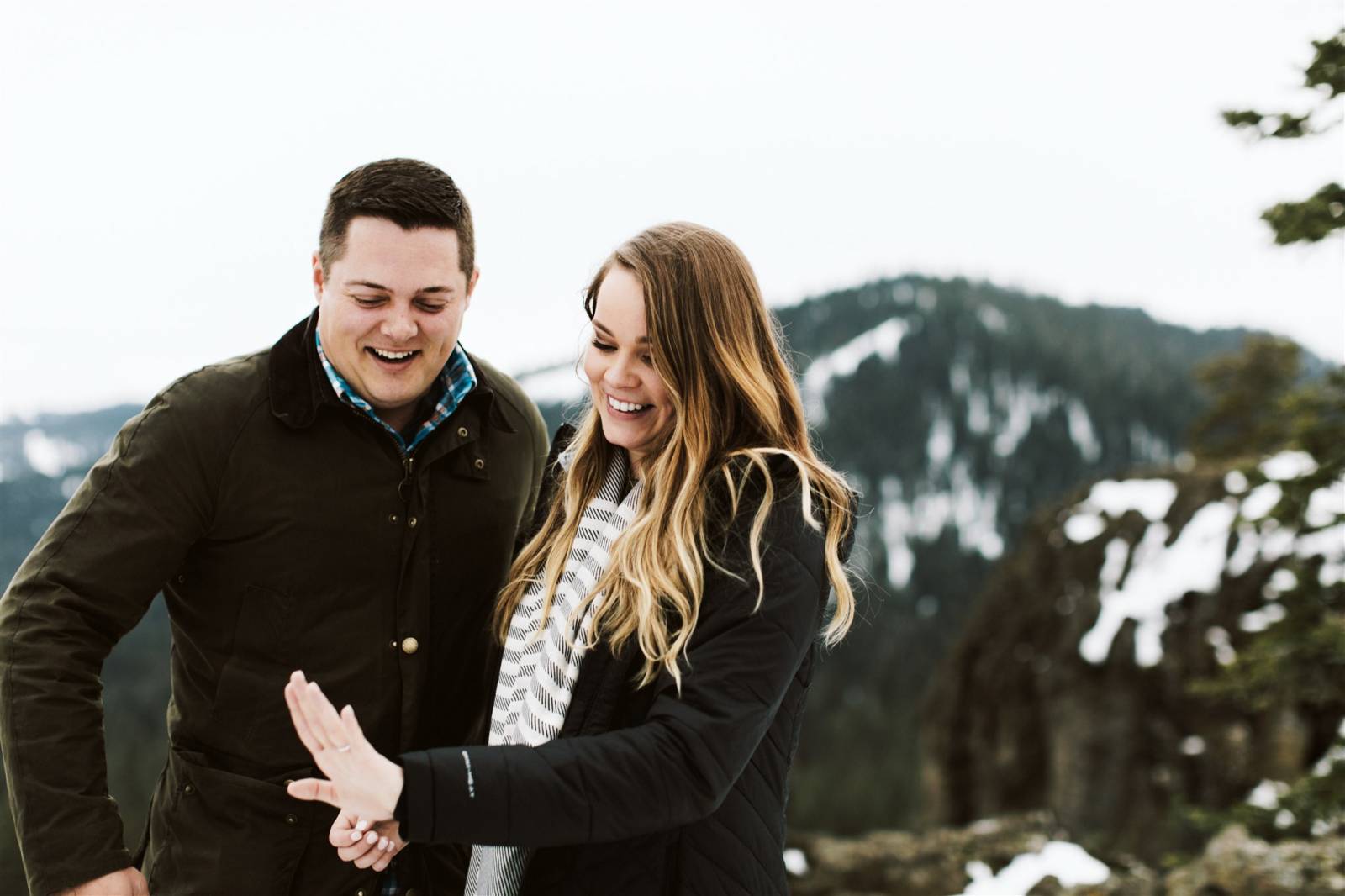 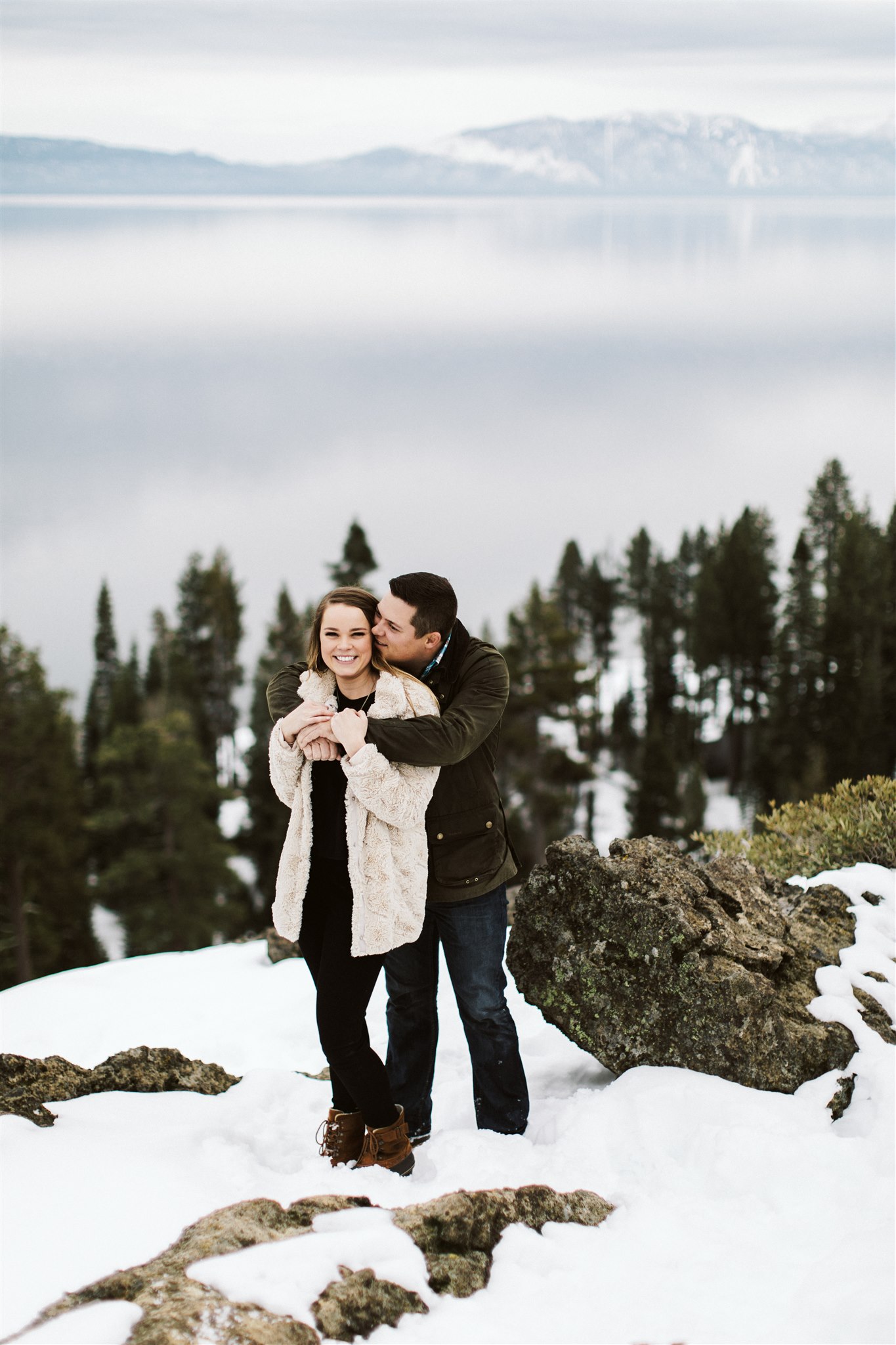 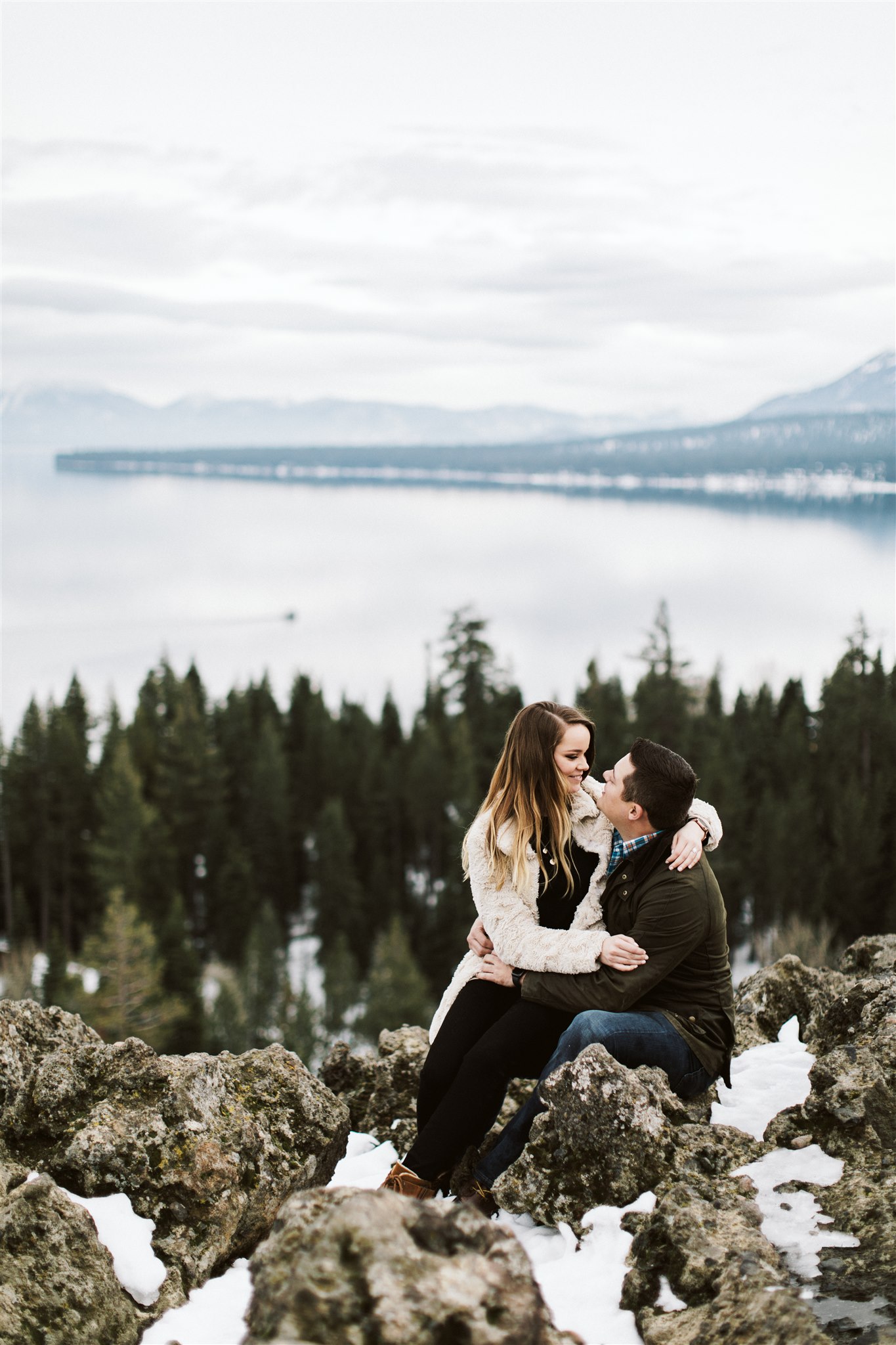 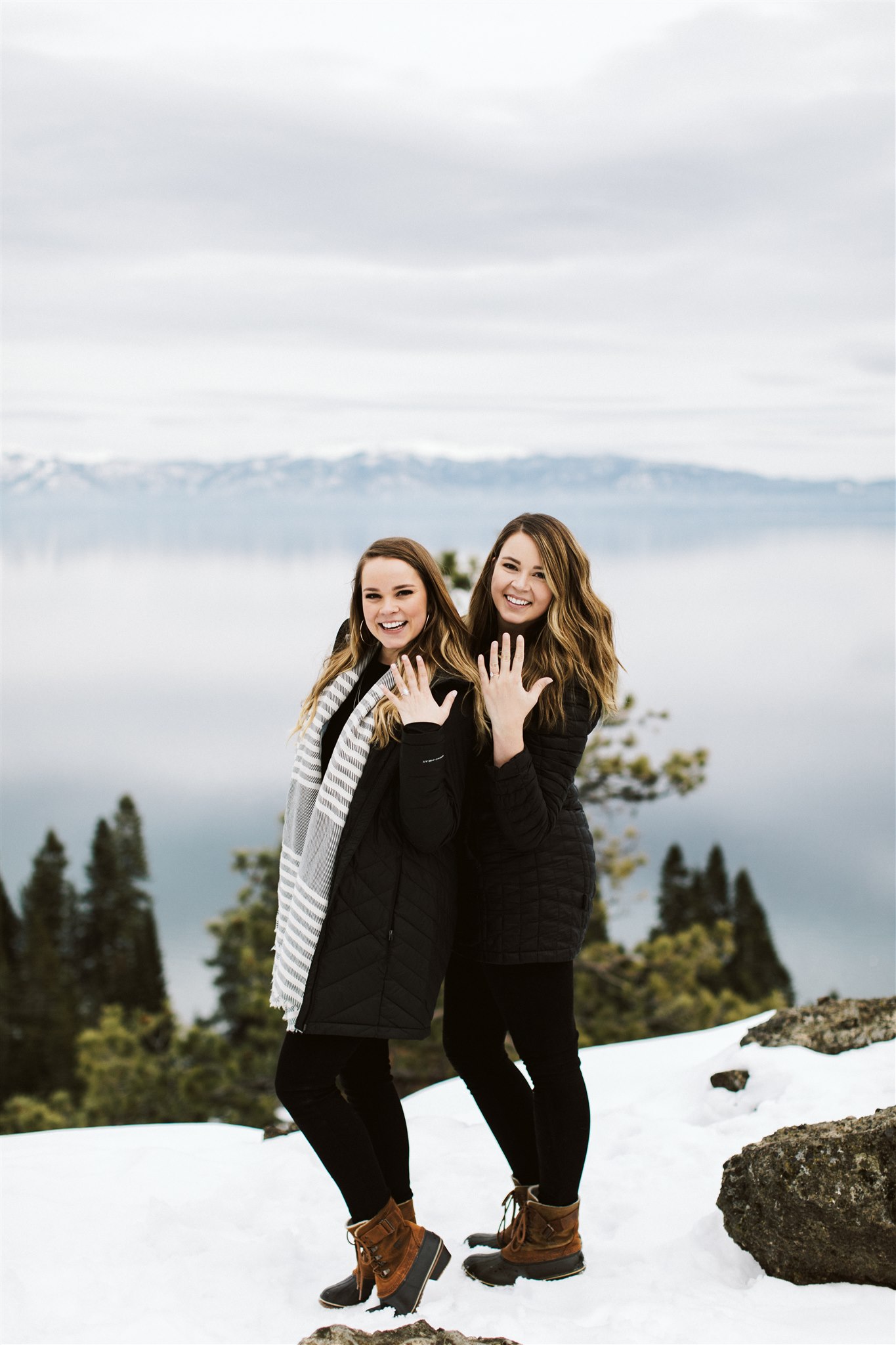 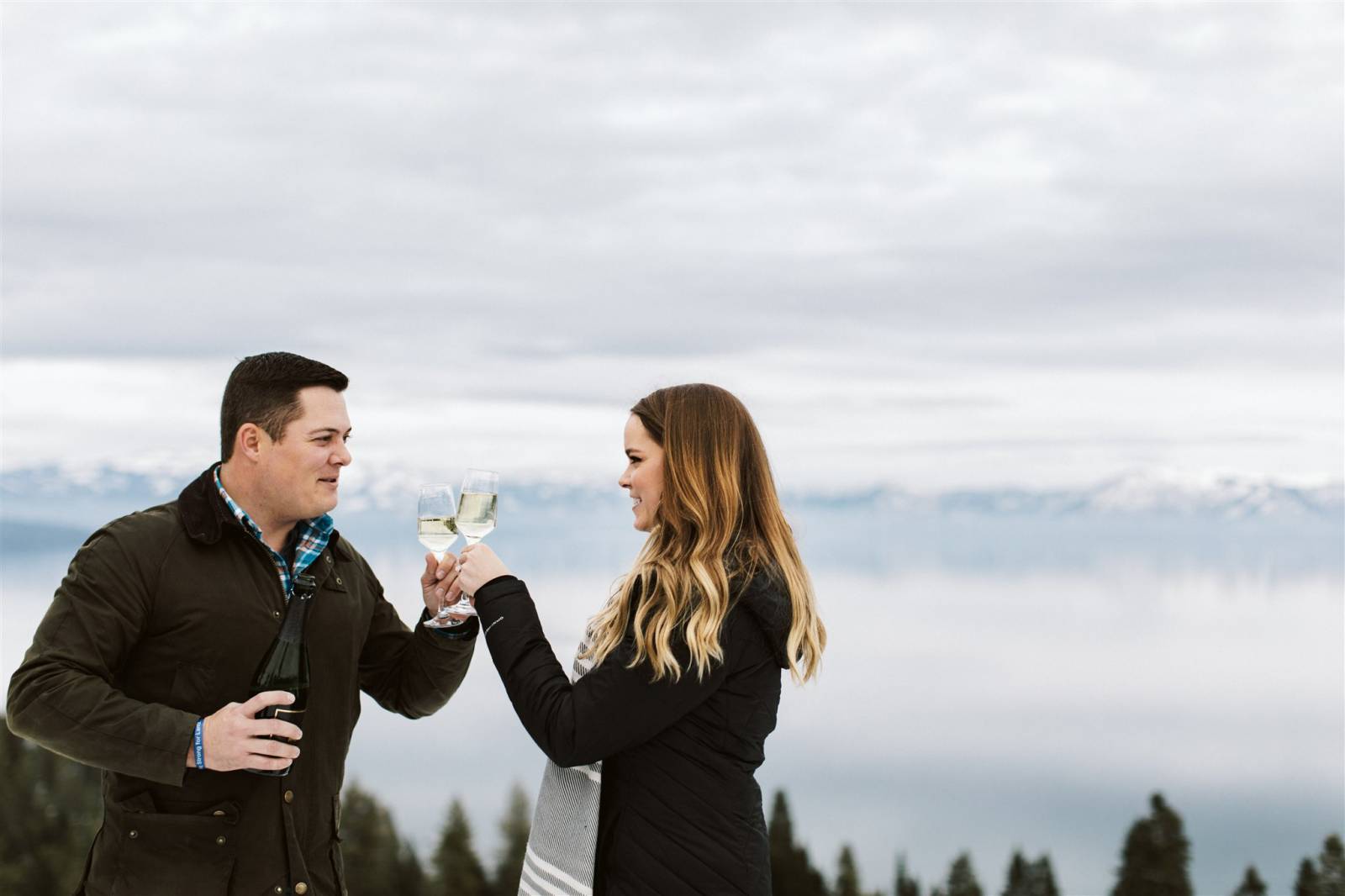 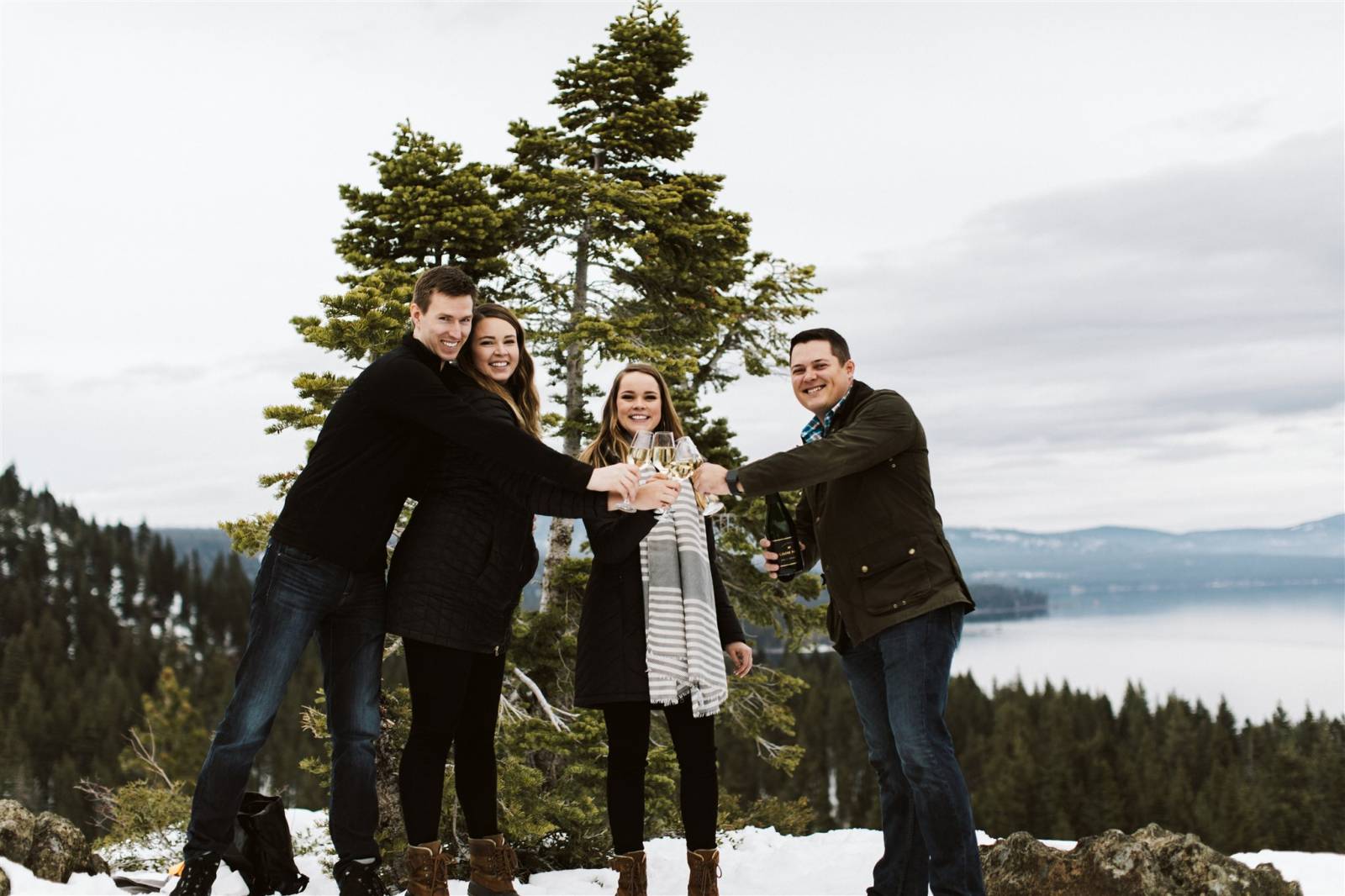 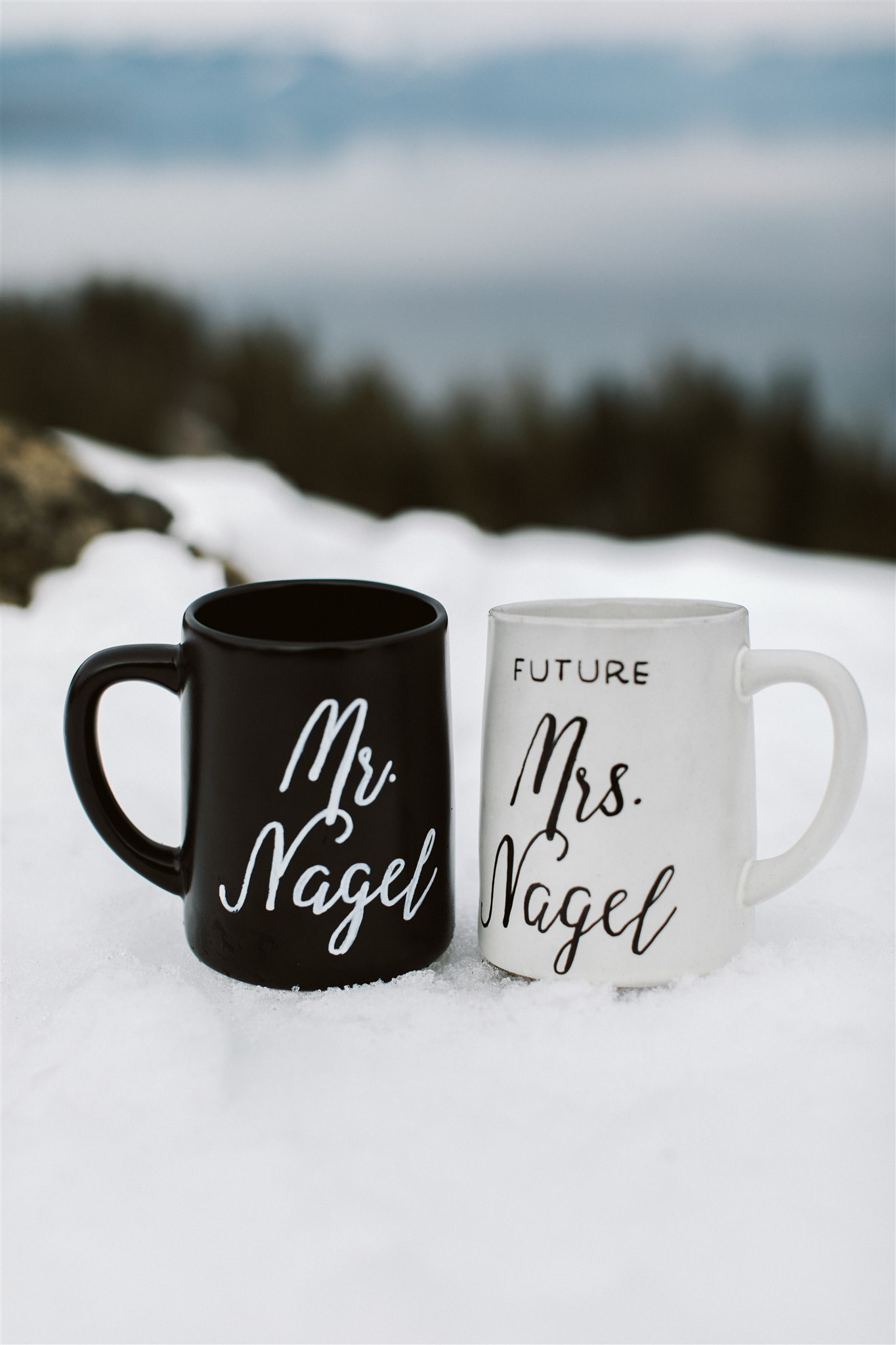 Ten Tips For Including Your Dog in Your Tahoe Wedding

Why You Should Hire Local Tahoe Vendors for Your Wedding

We are Tahoe Unveiled!